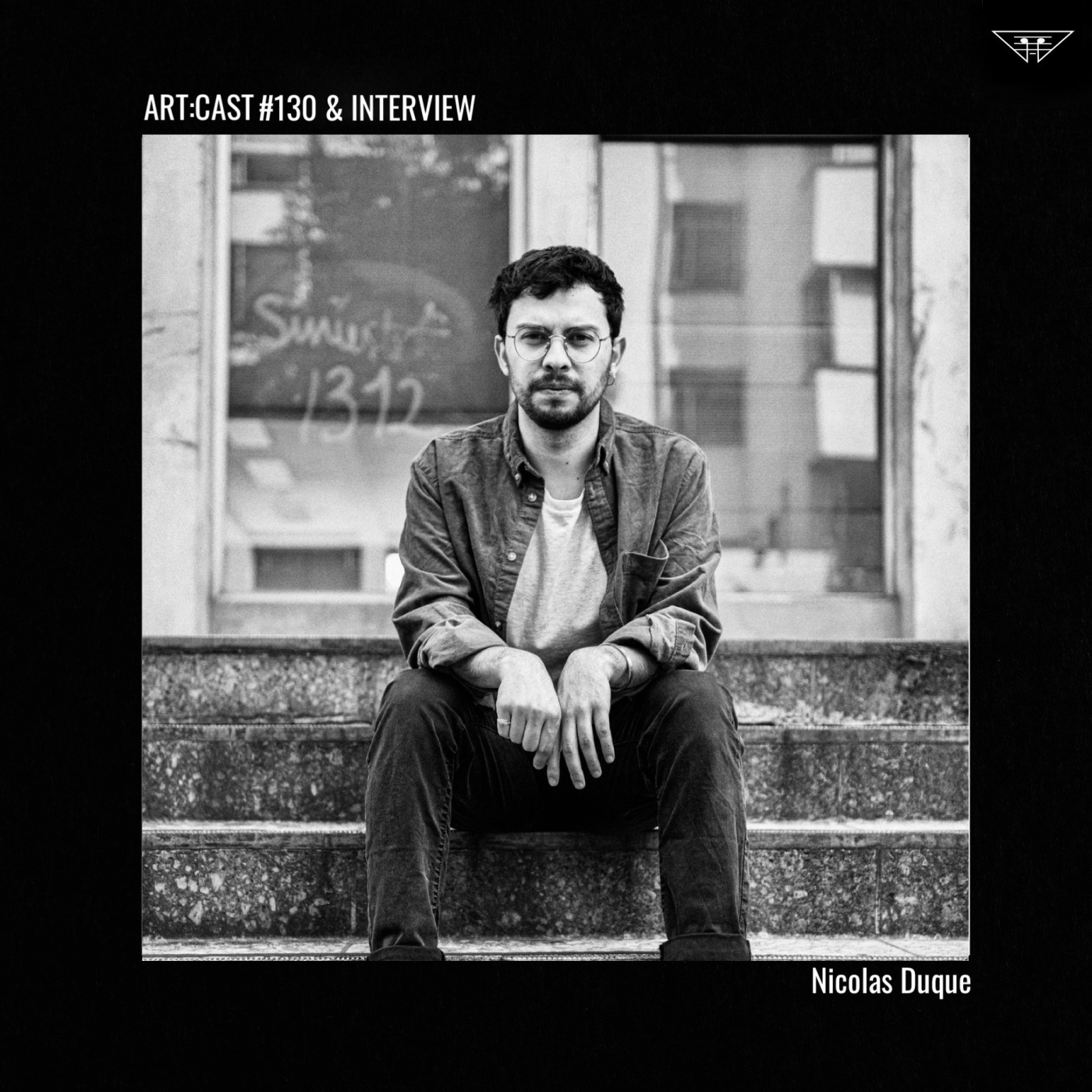 Nicolas Duque is a relative newcomer to the scene with only a couple of releases under his belt. However, he managed to develop a recognizable and distinct sound influenced by hazy 90s House Music and UK Garage that is deep and quirky at the same time. So far the Colombian-based artist released music on renowned British labels like Lobster Theremin, Dansu Discs or Nuances de Nuit  and has some new stuff already lined up for this year. Shortly after returning from the a short trip to the sea the artist sat down with Torture the Artist reflecting on his production process his EDM and Tech House past and pondered about possible pandemic influences on the scene as well as him as an artist. Ultimately Nicolas has mixed and compiled the latest art:cast, which pretty much sums up the artist’s current musical being.

Torture the Artist: Hello Nicolas, tell us something about your day.

Nicolas Duque: Hey guys, first of all, thanks for having me. Really appreciate the invite. <smiles> I just came back from a trip I did with some friends over to the Colombian north coast. Played a bit over there, partied and relaxed at the beach. The sea is always a good idea! But yeah, now back in Bogotá, where I actually live, getting ready to have a productive studio week I hope.

Torture the Artist: There is not much information about you in Internet. Tell us about your upbringing, early influences and your way into the electronic music scene.

Nicolas Duque: Well, I started making music a couple of years ago, 8 to be exact, although it was a bit slack at the time as it was mostly a hobby, so I didn’t invest as many proper studio hours into the process. I remember my brother and his friends arriving home with Ableton and a DJ controller. They began playing around trying to make a tune or just mixed with the controller and I was there just looking and learning from what they did, so as soon as the computer was free I tried to do  what they previously had made or just played around trying to make something sound good – without too much success. <laughs> Later on, I did some music production courses and kept learning by myself locked myself in the studio 24/7, having fun and learning from the process.

In 2019 I quit my full time job and went on pursuing my music career, focusing 24/7 on making tunes and finding gigs to play out. Unfortunately, the pandemic hit us and all the opportunities to travel, party and play were gone. However, I used that time to focus more on music and get tracks done, which in return, helped me out a lot because labels and DJs had the time to listen to loads of new music and artists, so I ended up catching Jimmy Asquith’s attention and got the chance to release a single and then an EP on Lobster Theremin. At that time Tom, T. Jacques), was very kind and answered every email I sent him with demos, sending me feedback to the tracks which eventually probably made me come up with something good enough for him and being released on his label Nuances de Nuit. At this point the ball was rolling and I just kept going with the flow and got to meet new people that supported me and gave me the chance to release music! It’s been a wild, unexpected and lovely ride since then, I hope it will never stop!

I wish I could say that I grew up listening to some nice names from the underground as Underground Resistance, Mike Millrain or any of the pioneers in our realm, but that was simply not case. My way into Dance music was mainly through mainstream Tech House and “EDM”, which I now look back and think it wasn’t a bad thing at all as it led me down the road to discover high quality dance music that until today still amazes me.

Torture the Artist: You are associated with a scene that lies on the outskirts of UK Garage, Minimal and modern Tech House that is trendy now. How do you fit in?

Nicolas Duque: Well, I know what you’re referring to, but I don’t like to be categorized in a specific genre or group of new sounds. I want and try to make the sound from the 90s (the dusty House as I call it), a time frame where I think artists just mixed a bit of sounds from House, Breakbeat, Techno, UKG without caring if they were producing a specific genre, but just work on Dance music with a groove, keeping it interesting and dynamic, and make your toes tip all the way through a 8 to 9 minute lasting track. I think that’s the way I want to head with my new releases, without using only specific sounds from one genre, rather mixing things up with sounds of Breakbeats, House, UKG, etc. and produce interesting and intriguing music that makes people on the dance floor want enjoy to more of it.

Nicolas Duque: Uffff… there are loads of artists that I would like to collaborate with but the first ones that come to my mind in this moment are Pablo Arrangoiz, DMC, Alec Falconer, Youandewan, Liquid Earth, Man/ipulate, Anderson and Dj Void  and  I can ultimately say that there is something in the making with the last two.

Torture the Artist: What are some labels that have influenced you as an artist and some new hot underground stuff you are into, and why?

Nicolas Duque: There are loads of labels that have some incredible releases like UMM, Tribal America, Peace Frog & Swag just to name a few. I mostly dig for records from the UK, US or Italy that are from the 90s, I found they made sick records in that decade in those countries. As for new hot underground stuff, Mindhelmet is a label releasing some proper stuff, Dansu Discs has a really nice variety that is of my interest, Nuances de Nuit, Art of Dark, Perspective and Ba Dum Tish and others. Oh and not to forget Distro, which is super sick as well! Always keep digging.

Torture the Artist: Do you buy new music or relate on promos? What are your favorite places to dig for new music (online or offline)?

Nicolas Duque: I mostly buy digital music via Bandcamp and dig through labels’ back catalogue on Beatport, although lately I’ve been getting promos of sick artists and great labels, so I definitely use these ones. And when it comes to buying music “offline”, meaningly when I travel, I try to go to all the good record shops friends recommend and bring home as much records as I can (shoutout to Ocean Grown Vinyl and Human Head). <smiles>

Torture the Artist: Let’s talk about the way you make music. Are you more of a software or hardware guy? Do you have a lots of gear or do you rely on presets and plugins? What software and hardware are you using?

Nicolas Duque: My setup consist of one midi keyboard controller of 61 keys, a 25 key Akai MPK mini, a Juno 06 boutique, the Roland Tr8 & Roland Tb3. At the moment I’m more of a software guy and rely on plugins, I really like the Roland cloud and the Arturia’s analog lab, I find they really make a good job and are super easy and quick to use and get ideas going. However, at the moment I’m looking out to upgrade my hardware game and buy an EMU Orbit and Roland MC505 or MC909, would love these to be the first big hardware pieces in my studio!

Torture the Artist: You have some Pop and Riddim-samples in your tracks. Where do you get them? Do you sample them directly from records, files, etc or do you use sample packs in a creative way?

Nicolas Duque: Well, for those tracks that have some more Pop samples I get them from records, mostly from those 2000 R&B ones that usually have a B side with acapellas. I don’t use that much of sample packs as I try to stick to vintage drum machines and synths. Although, I have previously explored Splice and find it a really good way to get the perfect sound you need!

Torture the Artist: Let’s elaborate on your creative process. How do you spend your time in studio? Do you have any concept about how your track will sound after you finish a session or do you try to just go with the flow?

Nicolas Duque: Recently I’ve started spending the first hours of every studio day listening to various mixes I haven’t had the time to listen to, as well as digging for samples over at Discogs, just to start getting a vibe or some ideas in my head of where do I want to take the session This means I’ve got an idea of sounds that I want to work with and it makes those initial hours of making a tune really exciting and will keep the flow of the track going. Once I’ve gathered enough samples I begin making drum patterns (it could be 4×4 or Breaks, it all depends on the sound of the samples I’ve gathered previously), and bass ideas, usually I like to make two different bass line ideas for different parts of the track and then continue with the synth melodies and harmonies that go along with the bass line melodies. So yes, in the end it is a mix of both: going with the flow and using the ideas I gather as a reference.

Torture the Artist: How do you think COVID-19 made an impact on electronic scene in 2020-2022? Did it influence your music in the one way or another?

Nicolas Duque: Oh it definitely has had an impact on the scene. First, as I already said, thanks to the lockdowns labels and A&Rs had the actual time to listen to new artists and find new ones. So yeah, that happened in my case and helped me to “break through” in the scene. Also, I think that during this time I dug load deeper into the realm of music I’m into, so I had the chance to find really good artists from back in the day that inspire my sound and everything around it. Also I found or got to know new artists who were in an almost equal situation and took the same path like me – some really had sick productions and things to learn from.

Torture the Artist: Tell us about your plans for the future in terms of gigs and releases?

Nicolas Duque: Well, as the pandemic is almost controlled and all the clubs and summer parties are beginning to take shape on the old continent, I’m planning a tour for the UK & EU this summer! My plans are to stay in the UK throughout June and then in July to go the European mainland, so if you want me in your city just contact me <smiles>, would be a pleasure to go and meet new people and get to share some of my records! Release-wise, I have been exploring the downtempo realm as I dig the drums in those records a lot, so I have some tunes coming soon on labels from friends alongside other great artists I admire. Also I have another EP coming on one of Lobster Theremin’s sub-labels but can’t tell much more about it and definitely there is more music to be announce soon.