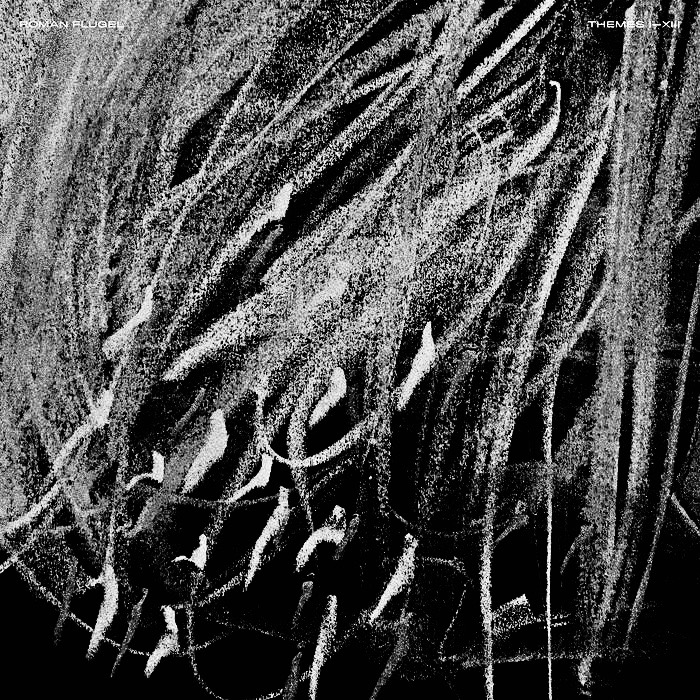 Roman Flügel has been basking in an outbreak of triumphs recently following the re-issue of three head-spinning tracks via his celebrated ‘1995’ EP, whose fluttering, elegant tunes reminded listeners why he has remained a stalwart of electronic music culture for well over two decades. With ‘1995’ re-visiting the emergent years of Flügel’s career, it was a surprise then, perhaps, that the subsequent debut release of ‘Themes’ on the ESP Institute arrived just 9 months after. In the last twenty years, Flügel has embedded himself into underground society, well-known yet still alternative, his name now synonymous with leftfield, independent creations. Now, in 2018, his two releases suspend themselves at fairly opposing ends of his sonic intellectual range, their differences prompting listeners to appreciate Flügel’s wide scope of abilities.

Whilst ‘1995’ rummages deep into Flügel’s signature sound (if there even is such a thing for such a chameleonic artist), ‘Themes’ is an interesting, subtle exploration of the whole breadth of the German artist’s musical prowess, with many tracks acting as self-meditative anchors and notions that have flourished out of an abstract tangent. The titles of each track add to the ideas of indefinable, experimental concepts; numerically ordered from I to XIII and thereby lacking any indicative titles, the EP feels like a memoir of thoughts and sentiments that Flügeldecided to contemplate upon through the resulting production. With the record marking the end of a gestation period between the conception stage of ‘1995’ and the birth of this thirteen-track collective, the two releases neatly signal the maturation of Flügel as an artist from a nascent figure to the bastion he now remains today.

But don’t let this influence you. Build your own beliefs of the record, because that’s what it aims for you to do.

The opening ‘Theme I’ is a duly atmospheric introduction. Characterised by its waxing and waning horns, off-beat drum inflections and an intermittent melody that perforates the sparseness, there’s a sort of tenderness that bleeds through the monosyllabic bleeps. ‘Theme II’ meanders into an extension of I, percussive chimes and soft piano chords persisting throughout the track as it darts into various tributaries of sound. Although it takes a rather abrupt ending, its curious measure helps it develop.

The A-side progression takes a subversive turn with ‘Theme III’. Somewhat troubling in its conflicting moods, ‘Theme III’ just about manages to edge near the evocative. Distorted hums paired with pianos climb into a crescendo before declining back down into a flowing metre that’s oddly reminiscent of a video game. It rises back into another exclamation – frothing with potential, but ultimately falling a little short. Perhaps though, upon second listening, this track – alongside the other more perplexing outputs – yields a different response from the initial listen. In its unfathomable nature, it incites the placement of one’s own thoughts, moods, and attitudes upon the track, rendering it different in interpretation between each of those listening. The justification of this type of track exists through the lack of concrete identity invoked by the absence of a title. It seems that Flügelis encouraging listeners to enjoy the production the way they see fit, rather than being swayed by suggestive names, vocals, or branding that might cause musical preconceptions prior to listening.

The B-side of the first vinyl is stirring at points, although has several moments that, in their outspokenness, bluster through into the peculiar. This is predominantly positive, however; with a shimmering overlay of contours that whirr into centre stage and high hats which stammer amidst some ominous, loitering horns, the first track on the B side is one of the strongest yields on the album. ‘Theme IV’ is an enthralling listen – dark, seductive, and utterly bizarre. Minimal, trippy, and massively stripped back, ‘Theme V’ seems modest at first until aggressive, reptilian zaps of sound bite into the percussion. There’s a good premise between the exposed shifts of tones and textures, but it lacks genuine direction, remaining in the semblance of a chrysalis for the duration of its three-minute appearance.

‘Theme VI’ leans a little too far into the overly saccharine and upbeat, almost caught somewhere between the loading screen for a game and a humdrum montage sequence; while it’s rhythmic, perhaps it’s fitting that this intermediating track is placed halfway through the record.

The C-side’s brashness resumes on the next track. With no fixed cadence and most certainly not a track to dance to, ‘Theme VII’ still somehow garners attention, existing akin to a piece of modern art that is open for interpretation. Harsh kicks skip around a buzzing, curt bassline, whilst a modular tempo bleats out against some scattered, futuristic high notes. There’s definitely no right approach on how to receive this one in particular, but maybe Flügel intended for this kind of response to be part of the fun – to project one’s own ideas upon the blank canvas.

‘Theme VIII’ is magnificently ethereal and iridescent, marking an intersection in the record where the direction floats towards the beatless ambient that Flügel is adored for. It’s as though the track is levitated, rotating like a holographic wind chime between a pair of fingertips, glances of light reflecting off from its assorted angles. As the track evolves, accents erupt from the underlying peals, wafting off, before disappearing completely – together.

In spite of the oriental, percussive strums, ‘Theme IX’ has a more organic character than its preceding tracks. Evoking the movements of nature, it’s harsh but compelling, the deformed echoes dissipating off as though they were a thought that just couldn’t awaken fast enough.‘Theme X’ skulks into the frame like a subtle tremor on the horizon. A resonating filter lets out sporadic chirps, alien against the trembles that materialise. Halfway through, it vibrates into a slightly more antagonistic tone, and the terrain morphs into murky whirrs and plucks that are unthreatening, but disconcertingly ambiguous too.

At the finale, the record reaches its most touching output.

Calm. Melodic. Friendly. Soothing. ‘Theme XI’ encourages a quietness in the mind that’s a welcome advancement from the more hostile territory inhabited by the C-side. Speckles of pitched delays overlay synth chords that seem to breathe out from the track. The silence, too, is just as expressive as the noise. As the 11th track advances, it seems to meld into the next track, any darkness of the record beginning to evaporate as the story reaches its final chapter. ‘Theme XII’ is timed impeccably. The penultimate song creeps up like a cautious sunrise, evoking an air of having travelled through a chronicle of nocturnal ruminations, now riding upon a rebellious dawn. Sporadically, it warps into an unsteady pace, but is lifted back up again by the broad, cinematic sweeps that exude through, ebbing away as the glacial strings taper off towards the end.

His movements are cautious like the thoughts we have, fearful, but playful, slipping between confidence and apprehension.

At the finale, the record reaches its most touching output. With the cinematic tension still rolling, ‘Theme XIII’ scales up from the previous track’s footings, mounting into one great big ambient throb, lending a sense of being caught eavesdropping upon an undisclosed brainwave frequency. A euphoric melody skitters atop the profound swell of bass, retreating back and then cascading away; it tumbles backwards, leaving behind the last, closing remnants of a piano, as though all that’s left is a solitary human figure tapping away at the keys. The image that arises in the mind’s eye is Flügel himself, sitting alone in his studio, exploring themes that simply don’t have a title yet, devotedly and wordlessly travelling through moods and ideas that he then intentionally curtails. His movements are cautious like the thoughts we have, fearful, but playful, slipping between confidence and apprehension. It’s a vulnerable closing moment, the exposure of the piano signifying a façade that has wavered, divulging a candidness that speaks of the beauty of creation, of not knowing when any piece of art is really ever finished – only ever abandoned.

It’s an expansive and multi-tonal creation, and although the project hardly contains even a smattering of club-ready tracks, the mental stimulation provided by the compilation shines through. Individually, some tracks can be confusing, but collectively, it takes on a full-bodied charisma that allows the release to thrive. Flügelsomehow manages to give a silhouette to the formless, allowing metaphysical concepts to float up and settle in the stitches of reality, residing as half-formed, varying blossoms that together manifest a striking and insightful entity.

Backstories and presumptions can often be misleading, and there is conscious effort by Flügel to reject the musical classification that can so often sway the way we receive artistic creations.

‘Themes’ is certainly not as wowing as ‘1995’, but it is more gorgeously eclectic, and will enjoy the admiration of die-hard fanatics and musical philosophisers – rather than bounding to the forefront of any hype or mainstream popularity. In the accompanying press release, the writer takes a tongue-in-cheek approach to referencing the simplicity of the record, whilst (ironically) listing off the many accolades and talents that Flügel has. ‘Themes’, they claim, doesn’t really need an introduction, and althoughFlügel has an extensive back-story and approach that has cultivated and sustained his career, there’s no huge need for it to be elaborated on, since the record speaks for itself.

The press release hits the nail on the head. Backstories and presumptions can often be misleading, and there is conscious effort by Flügel to reject the musical classification that can so often sway the way we receive artistic creations. Frequently, we can be distracted from the fact that when we buy music, we are, simply, only buying the music – and not the artist themselves, or even the marketing, design and promotion. ‘Themes’ is a purposefully blank canvas, and confident in its determination to avoid any prior imposing of ideas upon the audience. But, despite the seeming self-assuredness of the author, it’s a sensitive collection, laying bare Flügel’s thought-processes with such a sincere openness that it may take aback many who hear it. What’s for sure is that it’ll create a lasting, personal impact upon those who sit down and listen to the whole thing, rewarding the ones who keep their attention lingering right until the final minute.

But don’t let this influence you. Build your own beliefs of the record, because that’s what it aims for you to do.