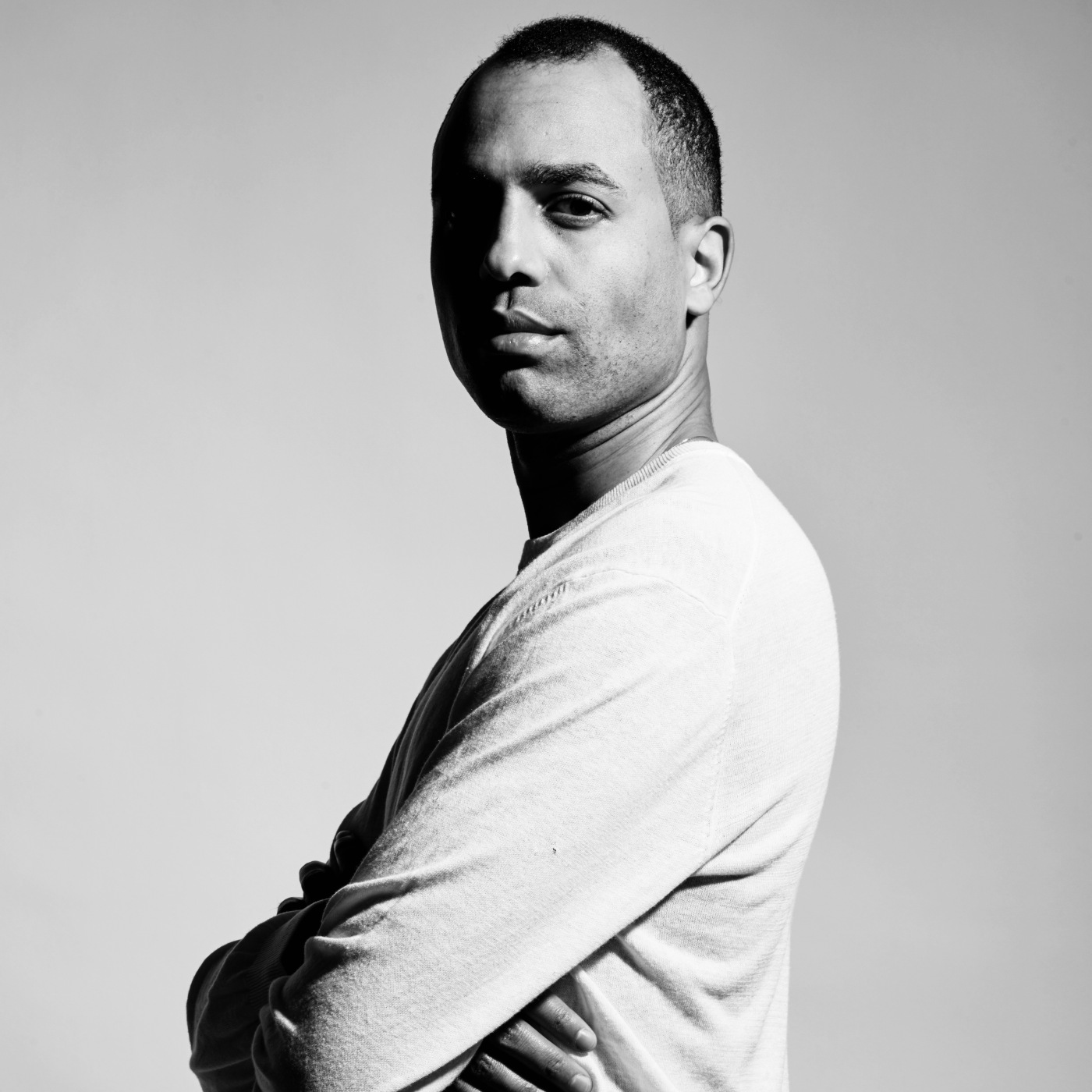 Spending his early childhood days in Nigeria, where his parents ran a club called ‘The Gallery’, which was dedicated to Soul and Jazz music, Laolu‘s passion for music dates back to the cradle. No wonder the currently in Geneva based DJ and producer created, according to Tale Of Us, one of the biggest hits of the decade with his remix for Dele Sosimi Afrobeat Orchestra’s track ‘Too Much Information’. As many artists perceive such a tremendous success as a burden for their forthcoming artistical output, Laolu used the hype around him and his music as an incentive to produce further quality music. His latest release, ‘Djougou Yah’, that was released in cooperation with Mr Raoul K on Munich label Compost, again aquired renown among well respected artists in the electronic music scene. Torture the Artist had the chance to speak to Laolu about his musical upbringing, the responsibility that comes with success and various other topics that accompany the artist at the moment.

I need to be able to feel the personality of the producer, to feel the uniqueness of what he is doing.

Torture the Artist: Hello Laolu, tell us something about your day.

Laolu: It’s a sunny and warm morning in Geneva. I’m drinking my coffee while answering this interview and I’ll hit the studio a bit later.

The brilliance is never in the writing, always in the rewriting.

Torture the Artist: Do you enjoy consistently implementing your musical upbringing and influences in your current productions or rather prefer to focus on whatever drives you, in the moment you’re producing a new track?

Laolu: I usually have several things that are in the works at the same time and rarely work on a totally new material as I believe the brilliance is never in the writing, always in the rewriting. I enjoy leaving demos for a while and coming back to them later to see if an idea is great and stands the test of time.

My creative process also includes listening to and studying a lot of music outside the dance world. The more varied your musical taste is, the more it helps you come up with something original.

Torture the Artist: A new EP on Munich label Compost, ‘Djougou Yah’, which you produced in cooperation with Mr Raoul K, was released earlier this month. Since you are based in Geneva, Switzerland and Raoul K in Lubeck, Germany, how do you overcome the 1,160 km distance?

Laolu: Distance is not an issue nowadays. We simply exchange files via WeTransfer. That’s the beauty of the times in which we are living. We also spoke a lot on the phone about the song structures and tested different versions.

I love his unique and very radical musical approach.

Torture the Artist: You have worked twice with Mr Raoul K, the first time, the both of you worked on different versions of his track ‘Sene Kela’. How did working with Mr Raoul K come about and what made you decide to go for a second session?

Laolu: I’ve been a fan of Raoul’s work since I first heard his track ‘Le Cercle Peul‘ ten years ago. I then invited him to play in Geneva and we became friends. I love his unique and very radical musical approach.

As for ‘Sene Kela‘ – it was written and produced by me, I had a vision for the song. Raoul K recorded the Balafon and Sonia Diabate’s beautiful voice. It’s a special track for me and I’m amazed that it has now almost reached a million streams on Spotify.

For ‘Djougou Yah’, this time we went back and forth exchanging ideas and we both recorded musicians.

Torture the Artist: If you could choose any artist from any genre to work with in the future, who would it be, and why?

Laolu: I’d love to collaborate with Charlotte Adigéry. Like many, I discovered her beautiful voice with her collaboration with Soulwax ‘The Best Thing‘. She also has a solo project named WWWater. I’m convinced our musical worlds could match.

Torture the Artist: What’s a process in your productions that needs to get done but you would rather fast-forward through?

Laolu: I’m studying harmony and composition for several years now and ideally, I’d like to be able to transcribe the music I hear in my head on pen and paper.

Torture the Artist: Your remix for Dele Sosimi’s Afrobeat Orchestra’s track ‘Too Much Information’ turned out to be one of the biggest hits of 2015. In retrospective, how did you overcome the hype around the track and what kept you grounded?

I’m the type of producer who is always striving to evolve and release something different.

Laolu: I was pretty surprised by this success. Having Tale Of Us saying it is the track of the decade and hearing it played everywhere did feel a bit overwhelming.

I’m the type of producer who is always striving to evolve and release something different. So to keep grounded, I took my time and came back when I felt I had something relevant to offer.

Torture the Artist: Has the success of the remix been a blessing or a curse in any way for Laolu, the artist?

Laolu: Definitely a blessing! One of the hardest things to do is to create something unique and undeniable. To write music that people will remember, so I’m thankful for this recognition. I also felt lucky to do this remix because Dele Sosimi was the musical director of Fela Kuti’s band Egypt 80. Being half Nigerian half Yoruba, I grew up listening to their music, so being able to work on that material meant a lot to me.

Torture the Artist: You grew up in Nigeria where your parents owned a nightclub called ‘The Gallery’ that was dedicated to Soul and Jazz music. Name three artists and corresponding tracks from those genres that have left an impression on you, and give reasons why.

Laolu: Miles Davis ‘Sketches of Spain‘, because of the arrangement by Gil Evans and the perfect combination of jazz and European classical music.

Bill Evans ‘The Peacocks‘ from the album ‘You Must Believe in Spring’. l studied the piece and love the joyful melancholy of the whole record.

Charles Mingus ‘Self Portrait in Three Colors‘. John Cassavetes is one of my favourite directors and I discovered this song in the soundtrack of his first movie Shadows.

Even if my African roots naturally diffuse in my productions, it is not a conscious choice to fit into this specific genre.

Torture the Artist: In the past one – two years the Afro-House genre has gained quite some popularity and artists such as Black Coffee or Culoe De Song have become internationally renowned stars. Has the genre’s development had any impact on your own career?

Laolu: Yes, the genre is definitely getting some attention at the moment. Recently Beatport even added an Afro House category to their platform and I have five of my songs in the top 100 at the moment. Honestly, I try to make the music that is as genuine and personal as possible. Even if my African roots naturally diffuse in my productions, it is not a conscious choice to fit into this specific genre.

The more you use your own culture and background, the more unique your music is and the more people connect to it.

Torture the Artist: Would you say that with a growing popularity and a certain financial scope, the responsibilities of DJs and artists towards society have become any bigger? And how should the aforementioned, or any rising DJ/producer use their influence to make a difference?

Laolu: I think the keyword is ‘authenticity’. It’s important to cultivate and put the emphasis on our differences and cultural singularities and we need more distinctive music out there. For example, if you look at someone like Peggy Gou who sings in Korean in her music, it is really inspiring. I believe that the more you use your own culture and background, the more unique your music is and the more people connect to it. That’s one way a young DJ/ producer could make a difference.

I think that belonging to these two cultures is my strongest asset. It may sound a bit cliché but in a sense, it has taught me the beauty of being Métis.

Torture the Artist: Since your father is Nigeran and your mother Swiss, have you ever experienced being torn between the two cultures and if so how did you overcome this feeling?

Laolu: No, I never had that experience. I think that belonging to these two cultures is my strongest asset. It may sound a bit cliché but in a sense, it has taught me the beauty of being Métis. And my productions are a reflection of this hybridization.

Torture the Artist: How was your first date with electronic music and what made you decide to go on a second date?

Laolu: My electronic music awakening happened when seeing Laurent Garnier for the first time and till this day I still remember vividly the first track he played. It shocked and impressed me so much that I immediately started to dig into club music. That’s when I discovered Detroit Techno with essential albums like ‘More Songs About Food And Revolutionary Art‘ by Carl Craig or ‘Lifelike‘ from Jeff Mills.

From my perspective, there are two main trends at the moment. One that is obsessed with novelty and unreleased music and the other who believe that dance music from 20 to 30 years ago is systematically more relevant than what is created today.

Torture the Artist: What’s your strategy for finding new music that fits into your DJ-sets?

Laolu: As I like to play eclectic sets, I try to listen as much as possible to various styles and keep curious about the different scenes.

From my perspective, there are two main trends at the moment. One that is obsessed with novelty and unreleased music and the other who believe that dance music from 20 to 30 years ago is systematically more relevant than what is created today.

I’m interested as much in Disco or old school Acid house as I am curious about contemporary music. In summary, I have one simple filter that helps me decide if I’m going to play a track: I need to be able to feel the personality of the producer, to feel the uniqueness of what he is doing.

Torture the Artist: What’s a super-power you wished you had?

Laolu: Maybe I also want the one my girlfriend wished she had, which is flying in the style of the movie Crouching Tiger, Hidden Dragon.