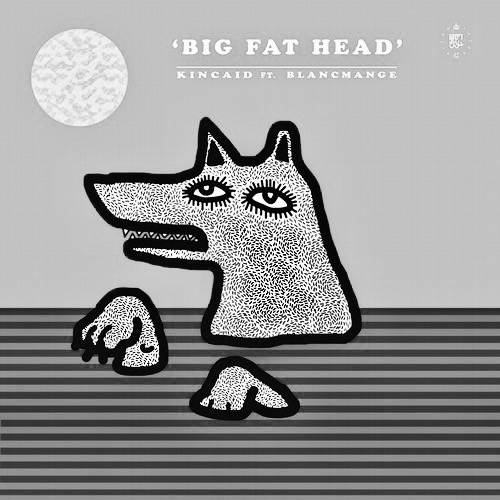 Music is so often spoken about as a vessel that charms strangers together. It has held this kind of spiritual function since its inception and continues to remain a universal gift to the world in its ability to unite unfamiliar faces and elicit a multitude of positive emotions and catharsis. It’s not atypical for creative collaborations to often arise through friendships, and acquaintances can end up as family when professional partnerships develop into cherished connections. But what happens when your collaborator is, and always will be, your immediate family? For English-born Kincaid, his latest EP, ‘Big Fat Head’, on Moscoman’s imprint Disco Halal presents a musical team-up with none other than his father, Neil Arthur – who also happens to be the sole remaining original member of 80s synth-pop band Blancmange – alongside label-head Moscoman, and the now-eminent Trikk.

It’s not the first time that the father and son have collaborated (although the release is the first original material from the duo as a pairing); at the tail end of 2018, Kincaid dropped a remix of a track from Blancmange’s 2017 ‘Unfurnished Rooms’ album titled ‘What’s The Time’, which took the original, boppy, guitar-drenched production and transformed it into a mysterious Middle-Eastern-sounding number that wrung the spoken word vocals into an ominous, echoed exhortation that you’d probably expect to only hear deep down the rabbit hole. This Disco Halal offering went down more than just a treat; it dispersed well onto dance-floors worldwide, even taking a grandiose appearance as the opening track in Dixon and Âme’s ground-breaking b2b at their Innervisions London showcase at the Royal Albert Hall back in September.

With such notorious admirers as Innervisions, it makes a great deal of sense that the remix for the Club Mix comes in part from Trikk, who partners up with Moscoman under an exciting new alias named NUCAT and pummels down the original mix into a synthed-out, stomping Nu-Disco rehash. Blancmanges’s voice is felled and modulated through a thick filter, emerging out the other side as an almost robotic, supernatural entity – a nice touch that is surely a nod to his 80s legacy, now merged with a futuristic resonance. February limbered up the record ahead of its release with Moscoman teasing the remix at his III Points East Boiler Room just last month; Neil Arthur’s voice croaks over the instrumental around an hour in with a weathered discourse on “going through events from last night, in your big fat head, staring into a void”. It almost feels as though you’ve completely lost your body and now float in some void, hovering in harmony with the buoyancy and vitality of the track as a disembodied head.

The Club Mix is much less 8-bit-video, but equally as contagious to the mind. Embellished with a medley of flutes, layered claps, bulging horns and tough bells, Kincaid’s original is gorgeously fitting for Disco Halal, and manoeuvres with ease through its esoteric and duo-chrome rhythms, Blancmange’s voice projected with much more clarity than the remix but still retaining its good-humoured lure. The track rages with an assertion that has its strong melodies and well-considered details to thank, pausing at just the right moments and never overdoing any of its enunciations. The focal synth seems to ripple as though it fell naturally in domino-effect from its preceding sounds; so natural is the track progression, it feels like its own narrative, which will no doubt bode well on dance-floors. In particular, the section of Blancmange’s voice that broods over a ‘burning in the pit’ evokes the sensation of being caught in a dragon’s lair, swept up in a blaze of jewels, smoke and flames that collapse suddenly as the track slopes back down into its governing pulse. The fantasy narrative that contours the entire track is invigorating, but its fictional gestures projects a pervasive message of light-heartedness, like a story that, even as wild as it gets, shouldn’t be taken too seriously.

The whole EP is generous in its material too; alongside the two primary focal tracks, the record offers an Instrumental and a Dub Mix. There’s a broad theme of sharing, contributing and exchanging that percolates through the project; Kincaid himself lends his illustration skills to the album artwork, which depicts a pop-art style dog floundering below a spartan, blood orange sky. Having taken an image that his father used to draw for him in his younger years to then reimagine and refashion with his own artistic panache, it could perhaps even be said that Kincaid remixes a childhood memory, pulling it into the present day in the same way he beckons his father’s 80s sound to the surface from its bygone roots.

It’s an EP that quietly warms the heart when you know the background of its creation, but the project itself when listened to without this context, takes on a more voracious bearing. The tracks are flagrant and unwilling to be anything else except what they are, with a kind of kind of tactful confidence that’s both impressive and full of flavour. But don’t mistake the mood of the music with the attitudes of the producers; ‘Big Fat Head’ is an earnest, wholesome project that only serves as a reminder of the remarkableness of four talents who, despite spanning various countries, cultures and generations, all come together with a collective poise that is fairly spectacular when you consider each one’s varying backgrounds.

When Kincaid’s remix of ‘What’s The Time’ was released, it was accompanied by a short description that closed upon declaring him as ‘another addition to the family’. The whole thing is certainly a burgeoning family affair, and we can’t wait to see how the family tree continues to bloom.