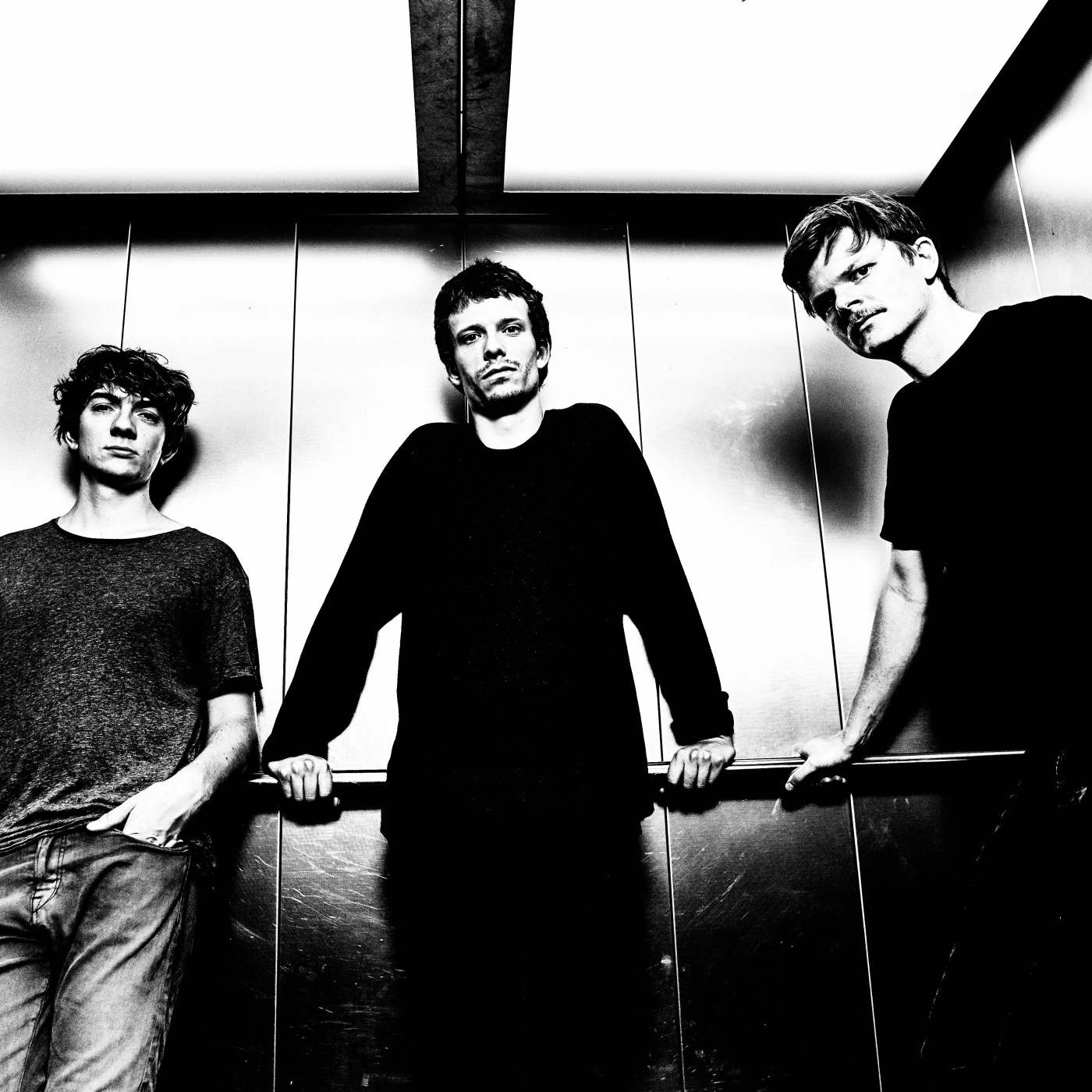 Berlin trio KUF released their third album ‘Universe’ today on Stefan Goldmann run label Macro Recordings and delivers 13 tracks that represent the band’s musical backgrounds paired with a playful still mature approach to music that completely underlines the group’s personal drive of ‘performing’ . KUF, that is Valentin, Tom and Hendrik, design music that works in both situations: on stage or at home, even though the trio itself has a preference for performances as they said in a little chat with Torture the Artist shortly before the album’s release. With the release of ‘Universe‘ KUF presents their musical experiments through various soundscapes creating calm and restless atmospheres to their audience. Listen exclusively to the group’s track ‘Nothing’s Wrong’ on Torture the Artist and enjoy the little chat we had with Valentin, Tom and Hendrik.

Torture the Artist: Is your KUF moniker a reference to the video game series ‘Kingdom Under Fire’? Or if not, what’s the story behind it?

Valentin: There is no reference to the game. When we were thinking about a name for the band we wanted to find an abstract, short word that doesn’t directly jump to the conclusion of genre x.

They say ‘in Mannheim you cry twice’ – when you move there and when you leave.

Torture the Artist: Hendrik and Valentin – sorry to exclude you with this Tom – you two studied Jazz- and Pop-music in Mannheim. A lot of artists who’ve made or studied music in the city have quite a deep relationship to it. Does this apply to you two as well?

Hendrik: They say ‘in Mannheim you cry twice’ – when you move there and when you leave. That’s absolutely true! When I first moved there I hated it. Fortunately, I got to meet the right people and found the right places that make this city so special. So I really miss those good old Mannheim days and many friends I’ve found there. Every time I come back to play in Mannheim, the city truly feels like home.

Valentin: It’s a great place with a really lively music scene, although it is not the biggest city. I also love to come back there. It has a nice underground scene. For example there is the B-Seite Festival, where we performed several times.

Torture the Artist: How did you come up with the idea of founding a band that doesn’t have a lead singer?

Valentin: Our roots are based on an acoustic context. We started with piano, double bass and drums. So it was not like ‘Oh let’s start a band without a singer’. Subsequently we started to add synthesizer and sampler, and that led us to a more electronic sound. Working with vocal samples instead of a real singer gives us unlimited possibilities to use voices in a more abstract way, for example as a simple rhythmic element.

Tom: I already used vocal samples in productions before KUF and I wanted to find a way to play them intuitively live, so I bought a sampler. For me it still feels like playing acoustic music, because I can use the vocals in a similar way to a piano or synthesizer, such as playing chords or melodies.

Torture the Artist: The fact that you do not have a singer leaves you with the opportunity to work with different vocalists. Do you working with the one or the other in the future or does this not fit your current musical approach?

Valentin: There are no concrete plans or specific singers on our minds yet.

Torture the Artist: ‘Universe’, your third album, is about to be released. Some years ago you said in a trndmsk interview that your motivation to make music came from your wish to change the music scene. What relevance did this statement have for your latest album?

Tom: The full statement was that our motivation was to change the music scene, to challenge the listening habits of our audience, to bring more handmade electronic music to clubs and festival stages. The first point is misleading I think. It refers to our former impression that there could be more live bands in the electronic music scene.

Valentin: Back then I often had the feeling that all these people who go to clubs on the weekends to listen to DJs might possibly enjoy a live band as well. While working on ‘Universe’ we still had that idea of producing danceable live music in our minds, especially while making a liveversion out of the songs. But we did not subordinate our artistical output to this thought.

Torture the Artist: How have your ideals changed or developed over the years?

Tom: We love music that has a special vibe that surprises us. And we try to surprise each other while jamming in the studio. ‘Humane’ is an example for a track where we discovered something that we never played before.

Hendrik: What we aim for at our live shows is not to reproduce the studio arrangements, but to improvise with the elements of the songs. Improvisation and spontaneous interplay have always been important parameters in our music which force us to stay attentive all the time.

The moment when the track is finished or released is okay, but not really exciting anymore.

Torture the Artist: Speaking of your music, do you enjoy the feeling when a track or an album of yours is finished or the process of working on something new?

Valentin: To start with a ‘blank page’ is a lot of fun, because we have maximum freedom in what we are developing. Then there is the harder part to distil the good parts out of tons of material. When a track is finally finished I really feel relieved. Months later, when the track might be released I start to enjoy listening to it again!

Tom: I really enjoy starting a new tracks, the first dizzy jam, finding a sound environment, the search for interesting elements. The moment when the track is finished or released is okay, but not really exciting anymore.

Torture the Artist: Whom do you show your new tracks to first, and why?

Hendrik: I don’t show it to anybody until it’s mastered. Afterwards to some close friends.

Tom: Same with me.

Valentin: To good friends, most of them are musicians. I also show some tracks to non musicians, because I’m really curious what someone with that perspective gets out of the track.

Torture the Artist: The way the vocals on your track ‘Nothing’s Wrong’ are cut or worked with could be a reference to Tom and Valentin’s HipHop past. Was this a subconscious hint or meant to express your musical roots?

Valentin: I guess we don’t really have a choice whether we want to refer to our musical backgrounds or not. So I would say you can definitely hear our HipHop past on the album. But not only the past, I’m still listening to a lot of HipHop music.

Torture the Artist: Did your album result from one of your jam-sessions or, if not, what process was behind the production?

Tom: For me, the production starts with the collection of samples that fit the topic or mood that I have in mind. For ‘Universe’ I wrote some tracks that were recorded by three singers and became the basic vocal material of the album. When we started jamming in the studio I already had lots of sample environments on the sampler. Most of the tracks result from improvised sessions in the studio and some additional synths and percussion afterwards. We only sometimes start with fixed parameters (e.g. a harmonic structure).

One of the most important things is to somehow surprise the others with a new sound.

Torture the Artist: For you personally, what are the basic requirements to participate in a jam-session?

Valentin: After playing many, many jams together, I think one of the most important things is to somehow surprise the others with a new sound, rhythmic pattern or some fresh musical influence.

Tom: I have to prepare KUF Jams, because I always need fresh samples. If I have some good samples with me, the resulting jam is often very inspired.

Torture the Artist: What do you aim to achieve when you perform live in contrast to what you want to achieve with the music on your album?

Tom: One important function of the album production is to find out how our music will sound in the future. We try new things, search for a different vibe. In a live situation we focus on having a connection to the audience to experience the music together.

Valentin: Which only works if we generate some kind of energy that makes the audience attentive, whether they are dancing or not. This energy comes back to us on stage and is highly infectious. Then again producing music for our album gives us the possibility to concentrate on details, which wouldn’t be possible on stage.

Torture the Artist: Which aspect of performances would you like to re-experience?

Hendrik: The magic of the moment, the perfect groove and the right energy when something great happens for the first time while playing live or in the studio is irreproducable. For example, on the basic recording of ‘Hundred Flowers’ you can hear on ‘Gold’ was the first take we did, even without really arranging the track before. We were just jamming.

Tom: Apart from those musical experiences I remember the burning speakers at a festival some years ago, which brought a special influence to our performance.

Valentin: Well, reproducing this moment too often might get expensive!

Torture the Artist: Describe your album with three characters out of the video game universe.

Tom: Zelda / Lara Croft / a mine in Mine Sweeper

Hendrik: Link from legend of Zelda. The way Tom is combining simple waveform-synths with arpeggios always reminds me of the Zelda soundtracks. Sometimes when Tom plays a diminished chord like that, I can hear the sound of finding a secret room in a Zelda dungeon by opening a crack in the wall with a bomb explosion. The nerds will know what I’m talking about. Some of our melodies definitely remind me of Sonic the Hedgehog and if you cut the high frequencies and add some reverb you are in a Super Mario underwater level.